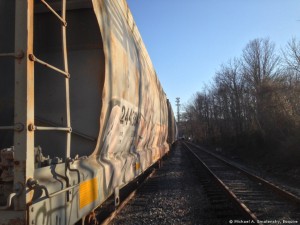 Any person, while operating a motor vehicle on any street or highway in this State, . . . who knowingly flees or attempts to elude any police or law enforcement officer after having received any signal from such officer to bring the vehicle . . . to a full stop . . . .

Importantly, eluding is a second degree crime “if the flight or attempt to elude creates a risk of death or injury to any person.” Additionally, the Eluding statute establishes a “rebuttable presumption that the owner of a vehicle was the operator of the vehicle at the time of the offense.”

Penalties For All Eluding Offenders:

In one published opinion in New Jersey, a cop paced a vehicle on a highway at about 40 miles per hour. Aside from the vehicle’s speed, the cop had not observed any other erratic driving. Therefore, after about one-quarter of a mile, he activated his overhead lights to have the car pull over. Nevertheless, the car’s speed increased to about 50 mph. Consequently, the cop activated his siren and directed the driver to pull over with the police vehicle’s public address system. But the driver did not immediately stop. Instead, the officer observed erratic driving and speed fluctuations between 35 and 50 mph. Additionally, the officer saw the passenger throw a white package, later identified as cocaine, from the vehicle. Finally, after about one and one-quarter miles, the vehicle stopped.1

The panel held one must immediately stop one’s vehicle upon receiving any law enforcement officer’s signal. Interpreting the plain text of the eluding statute, the panel found it applies to “any signal” to stop. Additionally, the panel analogized the policy that prohibits citizens from resisting arrest.2 Thus, the Court reasoned that fleeing can create risks of danger to the driver, officer, other motorists, or pedestrians. Hence, the criminal penalty for failure to stop is to encourage compliance with the officer’s signal. Likewise, the motorist has the right to challenge an illegal stop in court. Therefore, the panel concluded one must immediately stop one’s vehicle after receiving any law enforcement officer’s signal.

Did the cops charge you with Eluding?