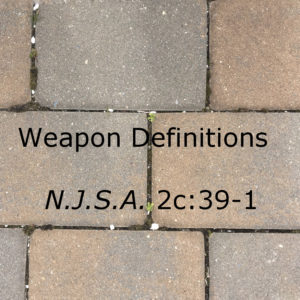 The following weapon definitions apply to this chapter 39 and to chapter 58 of New Jersey Statutes:

Antique firearm means any rifle or shotgun and antique cannon means a destructive device defined in paragraph (3) of subsection c. of this section, if the rifle, shotgun or destructive device, as the case may be, is incapable of being fired or discharged, or which does not fire fixed ammunition, regardless of date of manufacture, or was manufactured before 1898 for which cartridge ammunition is not commercially available, and is possessed as a curiosity or ornament or for its historical significance or value.

Deface means to remove, deface, cover, alter or destroy the name of the maker, model designation, manufacturer’s serial number or any other distinguishing identification mark or number on any firearm.

Destructive device means any device, instrument or object designed to explode or produce uncontrolled combustion, including (1) any explosive or incendiary bomb, mine or grenade; (2) any rocket having a propellant charge of more than four ounces or any missile having an explosive or incendiary charge of more than one-quarter of an ounce; (3) any weapon capable of firing a projectile of a caliber greater than 60 caliber, except a shotgun or shotgun ammunition generally recognized as suitable for sporting purposes; (4) any Molotov cocktail or other device consisting of a breakable container containing flammable liquid and having a wick or similar device capable of being ignited. The term does not include any device manufactured for the purpose of illumination, distress signaling, line-throwing, safety or similar purposes.

Dispose of means to give, give away, lease, loan, keep for sale, offer, offer for sale, sell, transfer, or otherwise transfer possession.

Explosive means any chemical compound or mixture that is commonly used or is possessed for the purpose of producing an explosion and which contains any oxidizing and combustible materials or other ingredients in such proportions, quantities or packing that an ignition by fire, by friction, by concussion or by detonation of any part of the compound or mixture may cause such a sudden generation of highly heated gases that the resultant gaseous pressures are capable of producing destructive effects on contiguous objects. The term shall not include small arms ammunition, or explosives in the form prescribed by the official United States Pharmacopoeia.

Firearm means any handgun, rifle, shotgun, machine gun, automatic or semi-automatic rifle, or any gun, device or instrument in the nature of a weapon from which may be fired or ejected any solid projectable ball, slug, pellet, missile or bullet, or any gas, vapor or other noxious thing, by means of a cartridge or shell or by the action of an explosive or the igniting of flammable or explosive substances. It shall also include, without limitation, any firearm which is in the nature of an air gun, spring gun or pistol or other weapon of a similar nature in which the propelling force is a spring, elastic band, carbon dioxide, compressed or other gas or vapor, air or compressed air, or is ignited by compressed air, and ejecting a bullet or missile smaller than three-eighths of an inch in diameter, with sufficient force to injure a person.

Gravity knife means any knife which has a blade which is released from the handle or sheath thereof by the force of gravity or the application of centrifugal force.

Handgun means any pistol, revolver or other firearm originally designed or manufactured to be fired by the use of a single hand.

Retail dealer means any person including a gunsmith, except a manufacturer or a wholesale dealer, who sells, transfers or assigns for a fee or profit any firearm or parts of firearms or ammunition which he has purchased or obtained with the intention, or for the purpose, of reselling or reassigning to persons who are reasonably understood to be the ultimate consumers, and includes any person who is engaged in the business of repairing firearms or who sells any firearm to satisfy a debt secured by the pledge of a firearm.

Rifle means any firearm designed to be fired from the shoulder and using the energy of the explosive in a fixed metallic cartridge to fire a single projectile through a rifled bore for each single pull of the trigger.

Switchblade knife means any knife or similar device which has a blade which opens automatically by hand pressure applied to a button, spring or other device in the handle of the knife.

Weapon means anything readily capable of lethal use or of inflicting serious bodily injury. The term includes, but is not limited to, all (1) firearms, even though not loaded or lacking a clip or other component to render them immediately operable; (2) components which can be readily assembled into a weapon; (3) gravity knives, switchblade knives, daggers, dirks, stilettos, or other dangerous knives, billies, blackjacks, bludgeons, metal knuckles, sandclubs, slingshots, cesti or similar leather bands studded with metal filings or razor blades imbedded in wood; and (4) stun guns; and any weapon or other device which projects, releases, or emits tear gas or any other substance intended to produce temporary physical discomfort or permanent injury through being vaporized or otherwise dispensed in the air.

Wholesale dealer means any person, except a manufacturer, who sells, transfers, or assigns firearms, or parts of firearms, to persons who are reasonably understood not to be the ultimate consumers, and includes persons who receive finished parts of firearms and assemble them into completed or partially completed firearms, in furtherance of such purpose, except that it shall not include those persons dealing exclusively in grips, stocks and other nonmetal parts of firearms.

Stun gun means any weapon or other device which emits an electrical charge or current intended to temporarily or permanently disable a person.

Ballistic knife means any weapon or other device capable of lethal use and which can propel a knife blade.

Imitation firearm means an object or device reasonably capable of being mistaken for a firearm.

Semi-automatic means a firearm which fires a single projectile for each single pull of the trigger and is self-reloading or automatically chambers a round, cartridge, or bullet.

Pistol grip means a well-defined handle, similar to that found on a handgun, that protrudes conspicuously beneath the action of the weapon, and which permits the shotgun to be held and fired with one hand.

Antique handgun means a handgun manufactured before 1898, or a replica thereof, which is recognized as being historical in nature or of historical significance and either (1) utilizes a match, friction, flint, or percussion ignition, or which utilizes a pin-fire cartridge in which the pin is part of the cartridge or (2) does not fire fixed ammunition or for which cartridge ammunition is not commercially available.

Trigger lock means a commercially available device approved by the Superintendent of State Police which is operated with a key or combination lock that prevents a firearm from being discharged while the device is attached to the firearm. It may include, but need not be limited to, devices that obstruct the barrel or cylinder of the firearm, as well as devices that immobilize the trigger.

Personalized handgun means a handgun which incorporates within its design, and as part of its original manufacture, technology which automatically limits its operational use and which cannot be readily deactivated, so that it may only be fired by an authorized or recognized user. The technology limiting the handgun’s operational use may include, but not be limited to: radio frequency tagging, touch memory, remote control, fingerprint, magnetic encoding and other automatic user identification systems utilizing biometric, mechanical or electronic systems. No make or model of a handgun shall be deemed to be a personalized handgun unless the Attorney General has determined, through testing or other reasonable means, that the handgun meets any reliability standards that the manufacturer may require for its commercially available handguns that are not personalized or, if the manufacturer has no such reliability standards, the handgun meets the reliability standards generally used in the industry for commercially available handguns.